The first calls to examine the laboratories began when it emerged that the Wuhan Institute of Virology, China’s only BSL-4 bio-laboratory, was only 8.6 miles away from the seafood market. Additionally, the Wuhan Centre for Disease Prevention & Control is located a mere 2.6 miles away. We can easily confirm this with Google Maps: 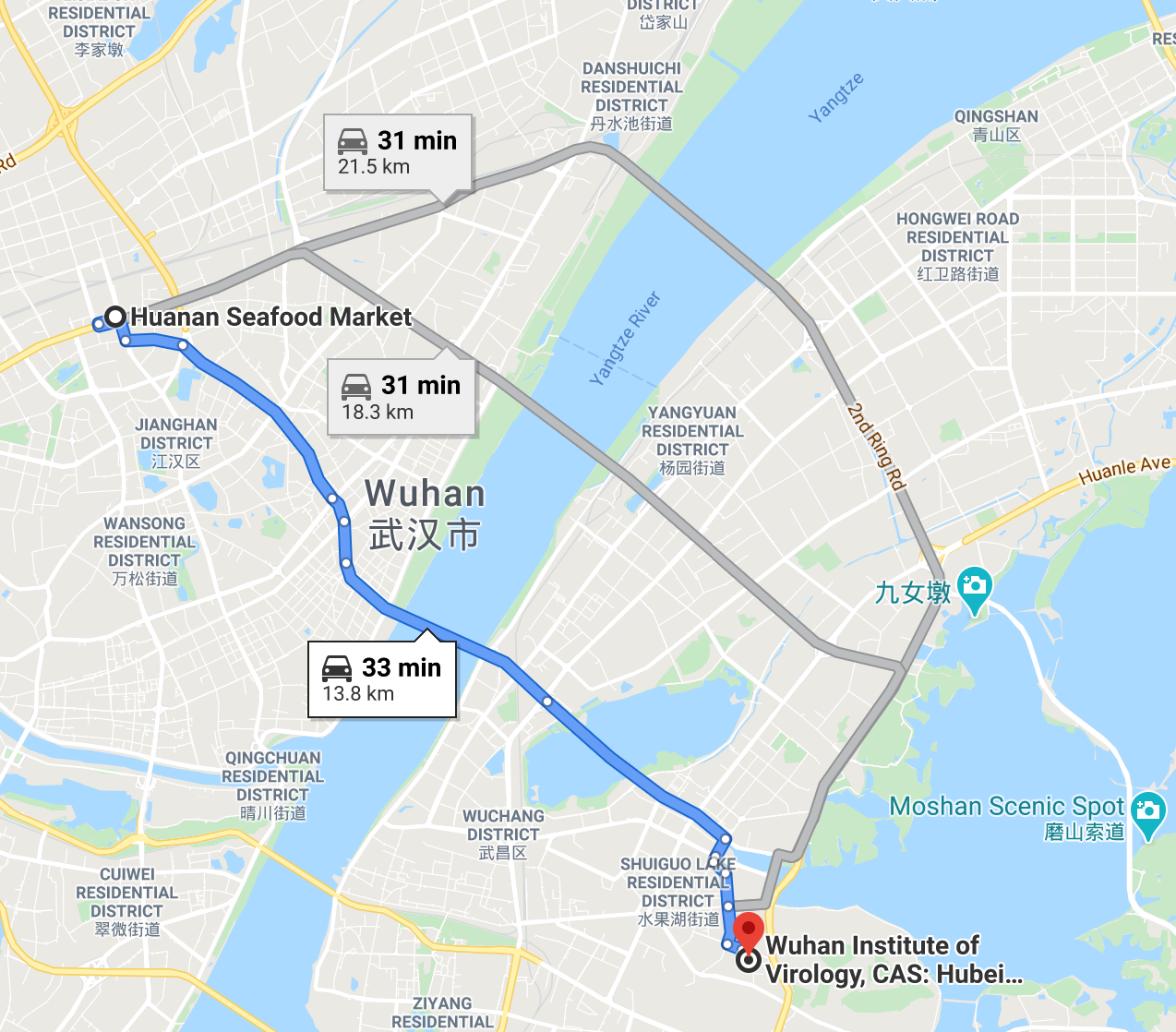 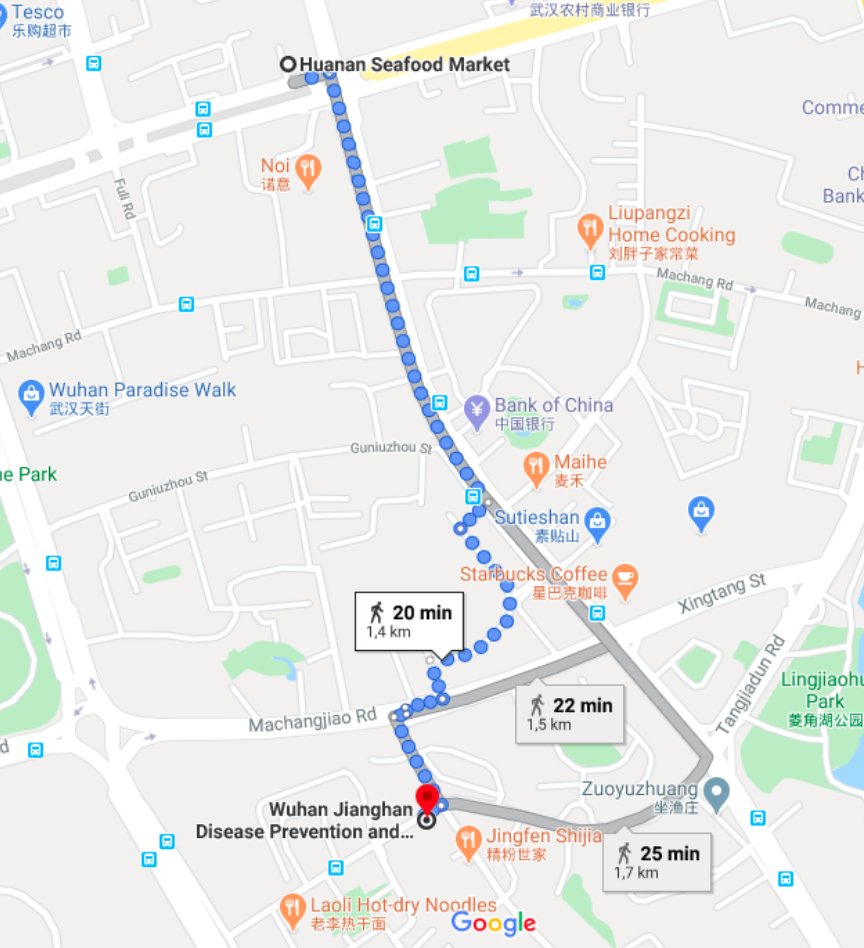 While the simple existence of these laboratories does not make them suspects, their proximity to the Huanan Seafood Market does. In Claim 2 we will prove it is entirely possible, and even likely, that an accident at either of these labs could have resulted in Patient Zero.

For now, let us prove that both of these labs have conducted experiments on the SARS-CoV-1 virus, some of which have resulted in variants of the virus, and may still be holding such viruses today. Furthermore, we will prove both labs have conducted experiments involving SARS-CoV-1 on live animals. The Wuhan Institute of Virology will hereby be referred to as WIV and the Wuhan Centre for Disease Prevention & Control as WHCDC.

8.3 A Note on Biowarfare

This document does not make any attempt to link the work done at these laboratories as part of a “bioweapon” or “bio-warfare” program.

The research that has been conducted in these labs, specifically in regards to peer reviewed papers from the WIV and less documented experiments at the WHCDC, may well have advanced our understanding of virology as a species. The sheer existence of such work does not equate to a “bio-warfare program.”

Furthermore, even if these labs are engaging in “bio-warfare” research, depending on the type of research, it would still be permissible under international law:

The scope of the BWC’s prohibition is defined in Article 1 (the so-called general purpose criterion). This includes all microbial and other biological agents or toxins and their means of delivery (with exceptions for medical and defensive purposes in small quantities). Subsequent Review Conferences have reaffirmed that the general purpose criterion encompasses all future scientific and technological developments relevant to the Convention. It is not the objects themselves (biological agents or toxins), but rather certain purposes for which they may be employed which are prohibited; similar to Art.II, 1 in the Chemical Weapons Convention (CWC). Permitted purposes under the BWC are defined as prophylactic, protective and other peaceful purposes. The objects may not be retained in quantities that have no justification or which are inconsistent with the permitted purposes.

China, and indeed any country that is a signatory to the BWC, is allowed to develop offensive bioweapons, in “quantities that are consistent with the permitted purposes,” as long as the purpose of doing so is to develop defenses against them.

Strategically, it would be a foolish choice to perform illegal bio-warfare research in the most closely monitored, internationally-linked biological lab in China. Western intelligence agencies are obviously aware of its existence, and the Chinese government knows that. Such illegal work, if done at all, is much more likely to be done in confidential military bases and covert labs that are not made known to the public.

In this claim, it is irrelevant whether the research being performed was for bio-warfare purposes or not.

We could not find any direct evidence supporting the theory that SARS-CoV-2 was intentionally released from a laboratory.

8.4 A Note on Bio-Safety Levels

As previously mentioned, the WIV has a BSL-4 lab. The WHCDC also operates BSL-2 labs. What does this mean?

The Bio-Safety Level (BSL), also known as the Pathogen or Prevention level (P) in the European Union, dictates the regulations and requirements present in a bio-laboratory. These precautions are necessary to prevent harm to employees, the people who interact with them, and life as a whole. The BSL of a given laboratory, at least in the United States, limits the type of pathogens it can operate with. For example, Ebola, smallpox, and plague can only be present in BSL-4 environments due to their potential to cause harm. According to both the WHO and CDC, activites relating to SARS-CoV-1 must be performed in at least a BSL-2 lab. For 2019-nCoV (now SARS-CoV-2), the CDC recommends most activities be carried out with “BSL-3 precautions”.

8.5 The Wuhan Institute of Virology, Chinese Academy of Sciences

The WIV has existed for decades; its Wikipedia page lists its formation year as 1956. It was only in 2014 that it finished construction of its BSL-4 lab, making it the only public institution operating a BSL-4 lab in China:

Inside the Chinese lab poised to study world’s most dangerous pathogens (February 22, 2017)

It will focus on the control of emerging diseases, store purified viruses and act as a World Health Organization ‘reference laboratory’ linked to similar labs around the world. “It will be a key node in the global biosafety-lab network,” says lab director Yuan Zhiming.

The lab’s first project will be to study the BSL-3 pathogen that causes Crimean–Congo haemorrhagic fever: a deadly tick-borne virus that affects livestock across the world, including in northwest China, and that can jump to people.

Future plans include studying the pathogen that causes SARS, which also doesn’t require a BSL-4 lab, before moving on to Ebola and the West African Lassa virus, which do. Some one million Chinese people work in Africa; the country needs to be ready for any eventuality, says Yuan. “Viruses don’t know borders.”

Since its inception, the global biosafety community has had concerns about this particular BSL-4 lab. From the same article:

But worries surround the Chinese lab, too. The SARS virus has escaped from high-level containment facilities in Beijing multiple times, notes Richard Ebright, a molecular biologist at Rutgers University in Piscataway, New Jersey. Tim Trevan, founder of CHROME Biosafety and Biosecurity Consulting in Damascus, Maryland, says that an open culture is important to keeping BSL-4 labs safe, and he questions how easy this will be in China, where society emphasizes hierarchy. “Diversity of viewpoint, flat structures where everyone feels free to speak up and openness of information are important,” he says.

Yuan says that he has worked to address this issue with staff. “We tell them the most important thing is that they report what they have or haven’t done,” he says. And the lab’s inter­national collaborations will increase openness. “Transparency is the basis of the lab,” he adds.

Has the WIV ever conducted experiments involving the SARS-CoV-1 virus?

Indeed, it has. In fact, it worked with the SARS virus years before establishing the BSL-4 lab (this, by itself, is fine, as SARS-CoV-1 is not a BSL-4 pathogen).

Outside of Wuhan |Coronavirus Hack

WHO Hacked Emails and Passwords