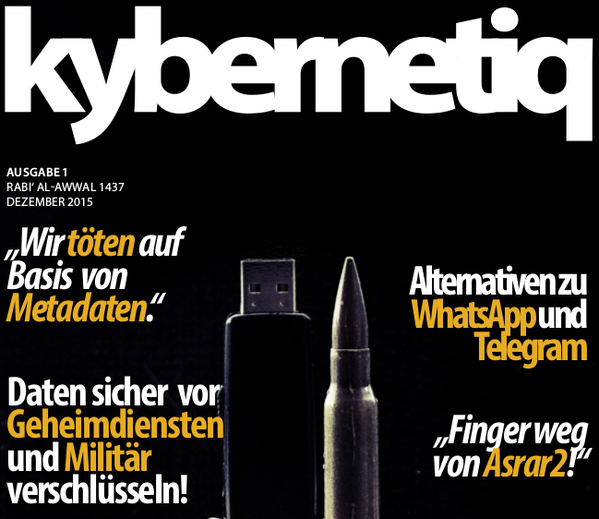 In what can be a nightmare for the governments and security
agencies, a group of German speaking jihadists have launched their own tech
magazine for other existing or aspiring jihadists. The magazine is titled “Kybernetiq”.
The magazine was launched by these jihadists on the social
media on 28th December 2015. These jihadists have also claimed on
Twitter that they are not affiliated to the Islamic State of Iraq and Syria
(ISIS) and that their intent is to help other jihadists to mask their online
presences by incorporating various measures that help them protect their
identities online.
According to this group, which presumably is from Germany,
or are German speaking, jihadists can use applications like Tails or Tor to hide
their online presence by browsing through the internet in an anonymous manner.
The group has also issued a guidelines for the jihadists that include masking
their true identities online and not revealing any point that would prove that
they are jihadists or mujahidin.
The group has also suggest the jihadists to use messaging applications
such as WhatsApp or Telegram. According to the information provided in the
magazine, these apps are encrypted and allows people to communicate with each
other without their messages easily getting decrypted by the authorities.
This magazines poses a more serious threat. It shows further institutionalization of jihadists that are well adept at using technology for
their own benefits. These jihadists are tech savvy young people who are guiding
others on how to use technology to maximize their benefits. It will definitely
further hurt the security measures of the authorities in safeguarding their
respective countries from further terrorist attacks.
It is imperative that the security agencies worldwide need
to take these threats seriously and take necessary actions to confront such
threats in an efficient manner.
previous1,500 paedophiles caught by the FBI through their systems | Fbi | Hacking |
nextFacebook Pulls Down Anti-Israel Page After Expose From An NGO | Facebook | Israel |