Anonymous keeps its word and its members protest

The day of the Million March Protest finally came and the
hacktivist group Anonymous kept its word. Yes, there was a march and there were
marches in several places and these marches were attended by thousands of
protesters. True to its word, the march was phenomenally successful but there
were instances of violence where protesters clashed with the police resulting
in injuries to the police officers and the arrests of the protesters.
But before we check what happen where, let us take a look at
the background of the protest marches. A year ago, an unarmed black teenager Mike
Brown was shot dead by a white police officer Darren Wilson in the United
States of America. The grand jury did not convict the police officer resulting
in his release. In the protest march that followed, Anonymous protested against
the police officer. 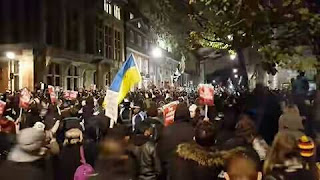 Anonymous members were threatened by the notorious racist
group Ku Klux Klan (KKK).
It has been a year since the incident and Anonymous in its
bid to oppose censorship, war and corruption as well as the racist incidents as
mentioned above where the government or the government officials are involved,
planned a march on 5th November 2015. Anonymous requested its
members to join the protest and march again the injustice. The hacktivist group
also stated that they will reveal the identity of Ku Klux Klan group members on
this day.
Last month Anonymous tweeted that its members will release
the list of 1000 KKK members and sympathisers on 5th November, the
day of the march to build a resistance against the racial violence, one of the
agenda it is supporting in the march. A few lists have already been released
containing the names of KKK members but Anonymous has not yet confirmed whether
the lists are released by its members. 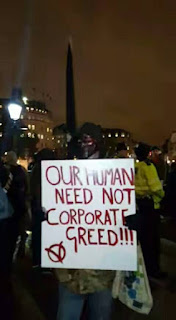 The reason for selecting November 5th as a day ofprotest because it was the date back in 1605 when Guy Fawkes tried to blow the parliament of England. The mask of Guy Fawkes was made popular by the character
V in the movie V for Vendetta. The mask is commonly used as the identity ofAnonymous members. The mask as well as the date of 5th November is considered by Anonymous as symbolic in their protest against the tyranny of the
governments.
But the march this year has turned out ugly. There wereclashes between the Anonymous members and the police and few cars were burnt as well while protesting. Three police officers were injured in the protest and are hospitalised. Also one police horse was injured in the protest clash as well. 50 protesters are arrested. The incident happened in London where 18,000 Anonymous hacktivists, wearing their trademark masks were protesting.
In the United States of America, the protesters were held in several cities. A large number of protesters attended the march in Seattle. In Washington DC, there were several protesters who participated in the march with
slogan “Nobody 4 President”. One of the placards held by a protester read, “If you stand for Nothing, you fall for Everything”. In California, Anonymous hacktivists protested outside the Los Angeles Times. In New York, there were protests outside Wall Street.
In other parts of the world, there were marches in Gautemala and Montreal. Also, there were marches in Amsterdam and Colorado. The march is an annual protest event of Anonymous that started in 2012. The current march was violent and led to clashes with police and damages to cars. Anonymous received a positive response from supporters from across the world.
Anonymousis considered as a movement with no apparent head or leaders. These are general people and there are no guidelines for who can become its members.
Tags:5 novemberanonymousKKKKu Klux klanmarchmeet hackersprotestwww.meethackers.com
previousHackers of iPhone awarded $1 Million Bounty
nextTor messenger allow anonymous chat